Litmus: Journey of a storage e2e and chaos framework for Kubernetes

This article is part of a #ProjectUpdates series on Litmus. In this blog post, we will share the latest developments in the project, which was announced & open-sourced during the KubeCon Europe 2018.

The objective of the Litmus project is to help evaluate stateful workloads on Kubernetes via storage & infrastructure focused end-to-end (e2e) tests that use chaos engineering tools & principles, amongst other aids, with the test cases executed as Kubernetes jobs. Over the last 10 months, there have been several improvements to the framework based on community feedback alongside an increase in the test library. The focus areas & improvements through this period, ongoing efforts & upcoming features have been summarised in the subsequent sections.

While the initial focus of Litmus centered around creating a K8s native approach to e2e (via test containers deployed as jobs) & facilitating a simpler interface for users to define & generate tests via English-like sentences (using godog), subsequent feedback from the extremely vibrant & involved OpenEBS community highlighted the need for users to be able to pick test cases, i.e., deployable test jobs from an existing test library to enable quick turnaround time for stateful workload evaluation. As a result, the existing ansible-based utils were extended.

One of the principles in the microservices world involves compartmentalization of an application service into several pieces to enable greater flexibility & control in administration. When the Litmus project was started, the entire workflow of the test: right from application deployment, through test business logic to clean up was embedded into a single job. While this continues to be a viable model in some circumstances, managing multiple user inputs/permutations at each stage of the workflow meant handling this in a single job would make the test a complex “monolith” & affect debuggability. 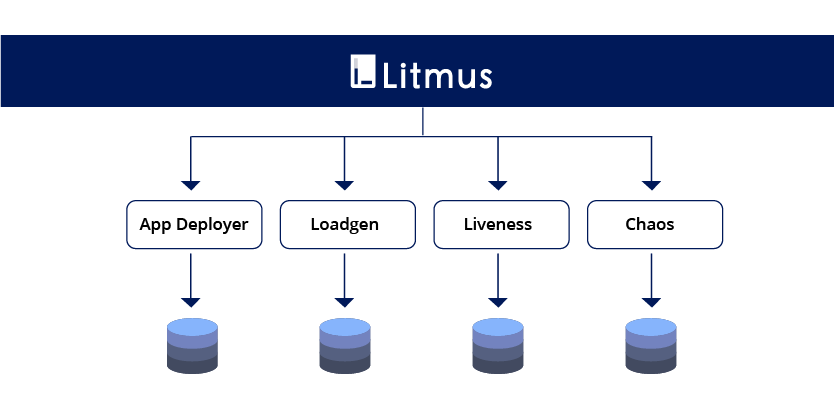 Another consideration was Litmus tests being used to drive Continuous Integration (CI) pipelines that aim to simulate user environments, where applications are typically soaked over a period of time undergoing various day-1/day-2-n ops while being resilient to component failures. This resulted in the creation of different categories of Litmus jobs (henceforth interchangeably referred to as Litmusbooks), which can be combined in a specific order to achieve an “e2e test” or “Litmus experiment”.

External liveness monitors: Monitors accessibility to an application server. While the standard K8s liveness/IO probes perform pod restarts to restore app server health, these external monitors test the seamless continuity of “end-applications” during the course of an app-lifecycle operation or chaos. 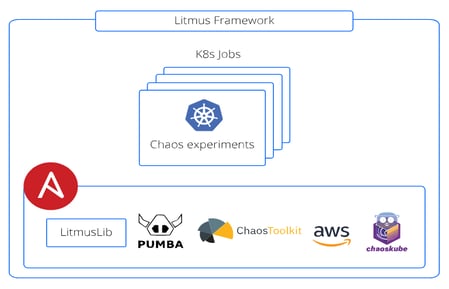 Typically, the lifecycle functionality & chaos litmusbooks include steps for post-test health checks on the application and persistent storage components, including data integrity validation. All the above requirements necessitated the creation of multiple “test facilitator containers”(maintained here) that implement python-based application clients and integrate other popular opensource chaos tools such as pumba, chaostoolkit & chaoskube.

One of the important enablers for the adoption of any given test (suite) into a CI framework is the result mechanism to determine success/failure. During the said period, Litmus moved over from extracting results from test container logs to storing this information in a Kubernetes static custom resource (“litmusresult”, which is updated by the test code at the beginning & end of test execution via a JSON merge patch operation), with the resource name dynamically generated based on user tags. This resource also holds other test metadata such as appType, testType, testStatus etc., apart from the actual verdict (result). CI jobs that implement/run the litmusbooks can be configured to derive job status from these CRs. 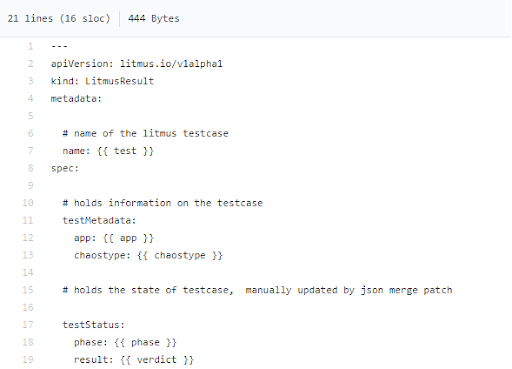 The project also saw some other organic changes which have resulted in its faster adoption into CI systems & increased efficiency of the tests. They have been briefly described below:

Simplifying Litmus Setup: The litmus pre-requisites are taken care of by a simple interactive bash script that sets up the RBAC, CRDs & config file updates.

K8s-Specific Enhancements: These include small changes to make the litmusbooks more robust, such as:-

Increased Modularization of Test Code: Most of the test code is reused across the litmusbooks, due to which reusable tasks are managed as separate utils. These are further classified as common, chaos & app/storage lifecyclemodules, with well-defined interfaces.

Optimized Test Images: The litmus runner (go, ansible) as well the test facilitators images have been optimized with respect to the number of layers, size and binary versions used.

The Continuous Integration framework for the OpenEBS project, i.e., the various components such as Maya, Node-Disk-Manager (control plane), Jiva, cStor (data plane) is built using Gitlab, with the e2e tests executed via Litmusbooks & supported by an Elasticsearch-Fluentd-Kibana (EFK) based logging framework. Post the build phase (where the above-mentioned components are built and images pushed to respective repositories) multiple gitlab e2e pipelines based on the Kubernetes cluster version are triggered, each of which includes the following litmus-powered stages to:

The gitlab runner scripts follow a defined pattern that involves the litmusbook preconditioning (user inputs), followed by litmusbook execution & monitoring of result custom resources, from which the success of gitlab job (and hence the stage) is derived.

openebs.ci provides a dashboard view of the build status for various commits to the openebs control plane and data plane projects, with detailed visibility into individual stage/job status & respective logs on Kibana. It also provides a real-time view of long-running production workloads using OpenEBS PVs which are maintained over multiple OpenEBS releases, with an option to induce random chaos on application/storage components & view the behavior. Litmus chaos modules are called internally to achieve this.

More details on the composition & functioning of this CI framework is available in this blog post.

At this point, the Litmus contributions are mainly focused towards increasing the application & storage life cycle tests, more specifically, Day-2 operations of standard stateful applications, while continuing to increase the stability of the current tests.

Some of the near-term improvements & enhancements include:

The improvements made to the Litmus project have been possible only due to the amazing support from the community both in terms of feedback, as well as contributions. So, a huge thank you & looking forward to more of the same!!


This article was first published on Mar 25, 2019 on OpenEBS's Medium Account