Faults are bound to happen no matter how hard you test to find them before putting your software into production — clouds and availability zones will have issues, networks will drop, and, yes, bugs will make their presence felt. Resilience is how well a system withstands such faults — a highly resilient system, for example, one built with loosely coupled micro services that can themselves be restarted and scaled easily, overcomes such faults without impacting users. Chaos Engineering is the practice of injecting faults into a system before they naturally occur. Chaos Engineering is now accepted as an essential approach for ensuring that today’s frequently changing and highly complex systems are achieving the resilience required. Through chaos engineering, unanticipated failure scenarios can be discovered and corrected before causing user issues.

Broad adoption has made Kubernetes one of the most important platforms for software development and operations. The word “Cloud Native” is an overloaded term that has been co-opted by many traditional vendors to mean almost anything; even CNCF has allowed the use of the term cloud native to describe technologies that predate the cloud native pattern by, in some cases, decades. For the purposes of this blog, I’d like to use a more technical definition of cloud native; cloud native is here defined as an architecture where the components are microservices that are loosely coupled and, more specifically, are deployed in containers that are orchestrated by Kubernetes and related projects.

In this blog, I would like to introduce a relatively new or less frequently used term called “Cloud Native Chaos Engineering”, defined as engineering practices focused on (and built on) Kubernetes environments, applications, microservices, and infrastructure.

CNCF is, first and foremost, an open-source community (while some projects may not be strictly cloud native, they are all open-source). If Kubernetes had not been open-source, it would not have become the defacto platform for software development and operations. With that in mind, I’d like to stake the claim that Cloud Native Chaos Engineering is necessarily based on open source technologies. 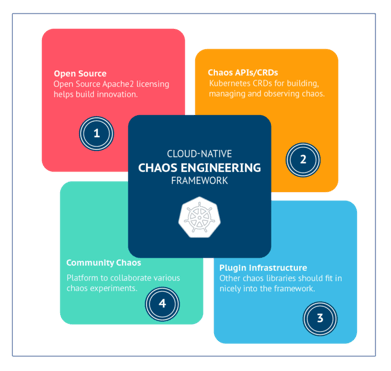 Litmus is a cloud native chaos Engineering framework for Kubernetes. It is unique in fulfilling all 4 of the above parameters. Litmus originally started as a chaos toolset to run E2E pipelines for the CNCF SandBox project OpenEBS — powering, for example, OpenEBS.ci — and has evolved into a completely open-source framework for building and operating chaos tests on Kubernetes based systems. It consists of four main components-

ChaosEngine: ChaosEngine CR is created for a given application and is tagged with appLabel. This CR ties one or more ChaosExperiments to an application.

The actual injection of chaos is done by chaos libraries or chaos executors. For example, the Litmus project has already built a chaos library called “LitmusLib”. LitmusLib is aware of how to kill a pod, how to introduce a CPU hog, how to hog memory or how to kill a node, and several other faults and degradations. Like LitmusLib, there are other open-source chaos projects like Pumba or PowerfulSeal. The CNCF landscape has more details of various chaos engineering projects. As shown below, the Litmus plugin framework allows other chaos projects to make use of Litmus for chaos orchestration. For example, one can create a chaos chart for the pod-kill experiment using Pumba or PowerfulSeal and execute it via the Litmus framework. 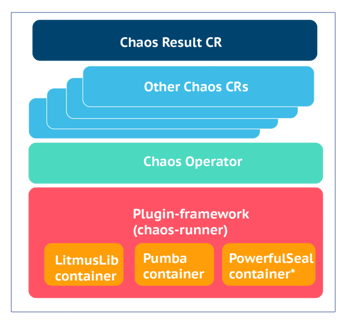 * PowerfulSeal and Pumba are shown as examples.

Chaos charts are located at hub.litmuschaos.io. ChaosHub brings all the reusable chaos experiments together. Application developers and SRE share their chaos experiences for others to reuse. The goal of the hub is to have the developers share the failure tests that they are using to validate their applications in CI pipelines to their users, who are typically SREs. 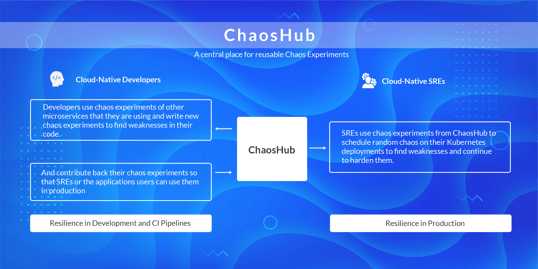 Currently, the chaos hub contains charts for Kubernetes chaos and OpenEBS chaos. We expect to receive more contributions from the community going forward.

Example use cases of Litmus:

Other use cases of Litmus are for inducing chaos in CI pipelines and production environments.

With the introduction of chaos operator, chaos CRDs, and chaos hub, Litmus has all the key ingredients of cloud native Chaos Engineering.

This post was originally published by Umasankar Mukkara, on Nov. 06, 2019 on CNCF’s blog.