A Primer on OpenEBS Continuous Integration

This article is part of a #Concepts series on Kubernetes and Litmus. In this post, we present an overview of the OpenEBS CI infrastructure with its Litmus powered e2e pipelines.

The OpenEBS project consists of several components (control plane and data plane) that directly support the dynamic provisioning and management of a persistent storage volume on the Kubernetes cluster. As with any microservice-oriented system following the DevOps paradigm, there is a clear need to continuously build and test each component, both in isolation (via unit tests) and in relation to the other pieces (integration tests) with an emphasis on standard end-user scenarios (e2e). Add in the need for basic interoperability verification (in terms of supported OS/Platform/Cluster versions) and you have the requirements for the CI framework.

The OpenEBS CI infrastructure is based on the Cloud-Native Gitlab CI framework, which is setup to monitor commits to the core components such as  Maya, Jiva & cStor and also e2e (reduces turnaround time to verify testcase sanity). It uses Litmus to drive the e2e pipelines, thereby providing a reference for implementation of a Litmus-Experiment based e2e suite.

Some reasons for adopting Gitlab as the CI framework of choice (amongst standard benefits such as tight integration with our existing SCM, 2-factor auth, webhook support, well-defined UI with pipeline graphs etc..,) were driven by the need to move away from a plugin-based model (jenkins thrives on plugins, which may not always be advantageous) to a self-contained platform that supports simple pipeline definitions (.gitlab-ci.yaml is far easier to maintain than the groovy-based jenkinsfile!). Gitlab also offers a more mature kubernetes-native solution that gives users the ability to dogfood OpenEBS storage as the back-end store (PostgreSQL) for the Gitlab server. 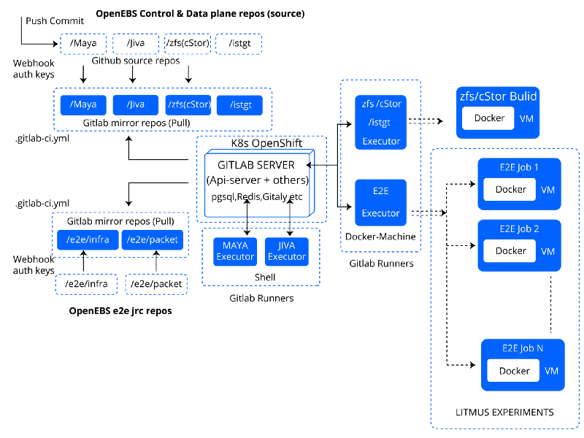 The Gitlab server (with its microservices such as Unicorn, Shell, Workhorse, Registry, Sidekiq, Gitaly, PostgreSQL, Redis, Minio) is hosted on a multi-node baremetal OpenShift cluster and is configured with pull-based repository mirroring of the OpenEBS component Github repos and a webhook based setup that triggers the pipelines upon commits.

The e2e phase involves running several parallel pipelines (based on Kubernetes cluster platforms or versions), with each pipeline containing multiple stages such as test bed setup, application deployment, Litmus experiments (functional and chaos), and finally clean-up. Needless to say, the component versions used are the ones built in the previous phase.

Note: Currently, the Gitlab CI works in a “retrospective mode,” as it is invoked on commits to the upstream branches. There is work in progress to extend the support for pull requests (presently, a travis-based build verifies commit sanity to aid PR acceptance).

Before triggering the e2e pipelines as part of the final step, the build pipeline performs a pre-e2e routine to generate metadata about the impending e2e run. As is evident from the previous discussion, the e2e pipelines are triggered against commits to any of the OpenEBS component repos (maya, jiva, zfs/cstor, e2e). Images pushed as part of the build pipeline are deployed during the e2e. Therefore, it is necessary to baseline or identify an e2e run against the primary trigger (commit) while maintaining the details of image versions of the other relative components.

This is achieved by writing the details of the baseline commit (timestamp, component repo, branch and commit ID) into the file head of a “baseline artifact” maintained in a separate repository. Once the e2e pipeline is initiated, the baseline artifact is parsed ffor the “most current” image tags of each component, which will invariably include the current baseline commit and the latest ones for other components, in the test-bed preparation stage. This information is then used to precondition the OpenEBS Operator manifest before its deployment on the test clusters.

One of the arguments against the inclusion of e2e as part of CI pipelines is that they could be flaky and time-consuming (under ideal circumstances it involves testing every moving part of the microservice and needs more maintenance). However, the e2e can confirm achievement of the goals that the solution was conceived and built to accomplish. The extent of coverage and the schedules can be optimized for development agility, but at OpenEBS, we feel it is a must-have in our CI pipelines.

OpenEBS CI makes use of Litmus to drive its e2e pipelines, right from test bed creation (cluster creation playbooks) all the way through the e2e tests (litmus experiments). The e2e pipeline involves several stages, with one or more gitlab jobs scheduled to run in a given stage. Each gitlab job is associated with a “runner script” that runs an “e2e test.” This in turn invokes/executes a litmus experiment (or litmus ansible playbook in the case of cluster creation/destroy jobs).

The various stages in the e2e pipeline are discussed below:

Various stages in the e2e pipeline

Cluster Creation: This stage calls up the Kubernetes cluster by executing the platform-specific playbooks. Cluster parameters are controlled via runtime arguments. The artifacts generated upon this job’s execution such as cluster config, which includes kubeconfig and cluster resource names, are passed over to subsequent stages as dependencies. The Litmus pre-requisites are also installed once the cluster is created. Currently, Litmus supports creation of clusters on these platforms:

Provider Setup: Here, the system deploys the customized/preconditioned OpenEBS Operator manifest (based on the baseline commit) on the cluster, thereby setting up the control plane and preparing default storage pool resources. The logging infrastructure (fluentd) is also setup on the created cluster.

Each Gitlab job running the e2e test executes (bash) scripts containing steps to run and monitor a Litmus experiment. These scripts are invoked using desired arguments, specified as part of the job definition in the e2e repository’s `.gitlab-ci.yml`. The standard template maintained in these (bash) runner scripts and the performed tasks are described below.

Generate Unique Test Name:Each gitlab job is associated with a litmus experiment that has a test/experiment name. The result of this litmus experiment is stored in a Litmus Custom Resource (CR) of the same name. The success of a test and therefore the gitlab job is derived from this CR. Occasionally, it is possible that the same litmus experiment is run against different applications or storage engines in a pipeline, thereby necessitating a unique element or ID in the CR name. In this step, a user-defined input (run_id) is accepted to generate a unique test/CR name.

Precondition Litmusbook:Each litmusbook (the Kubernetes job specification YAML) consists of a default set of test inputs such as placeholders for application, storage, chaos info, etc. These are overridden/replaced by desired values in this step. In addition, the default name of the test is replaced with the unique name generated by the runner at the start of execution.

Run Litmus Experiment: The litmusbook is deployed and monitored for completion, with a polling interval of 10s. The status of both the litmus Kubernetes job and the ansible-runner container is checked as necessary and sufficient conditions, respectively, to determine completion of the litmus experiment.

Get Litmus Experiment Result: The result CR with the unique name generated is queried to determine the Litmus experiment result. The runner script completes execution with a zero/non-zero exit code depending on a pass/failure result, thereby setting the gitlab job status.

OpenEBS CI uses the popular EFK (Elasticsearch-Fluentd-Kibana) stack as the logging framework for the e2e pipelines. Each target cluster brought up as part of the e2e pipeline is configured with the fluentd-forwarder daemonset and fluentd-aggregator deployment, with the latter streaming the logs to the remote ElasticSearch instance running on the master (Gitlab-CI) cluster. These are then rendered by the Kibana visualization platform that is also running on the master cluster. The forwarders are configured with the appropriate filters based on pipeline and commit IDs to aid in a quick data analysis. 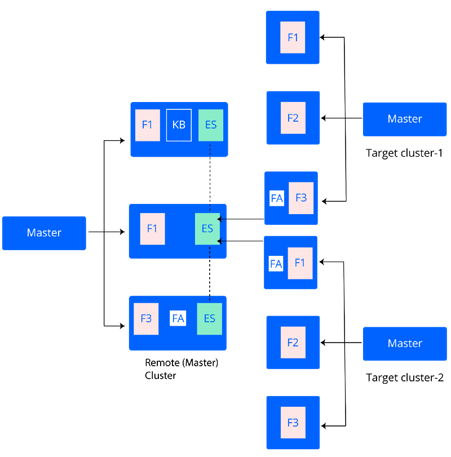 Hopefully this article has provided you with a better understanding of the CI/E2E practices in the OpenEBS project. CI is an important factor in contributor happiness as well as user confidence, and we are focused on continually making it more robust. Feel free to share your questions, comments and feedback with us — we are always listening!

This article was first published on Apr 2, 2019 on OpenEBS's Medium Account